Discover the beauties of Sri Lanka. The island is a jewel in the Indian Ocean – blessed with rich cultural assets, fascinating landscapes and hospitable people, it is definitely worth a trip. The excellent tourist infrastructure with good hotels, tasty curries and highly trained tour guides ensure that you can enjoy your trip without any worries. On this eleven-day trip you will visit the highlights of Sri Lanka. 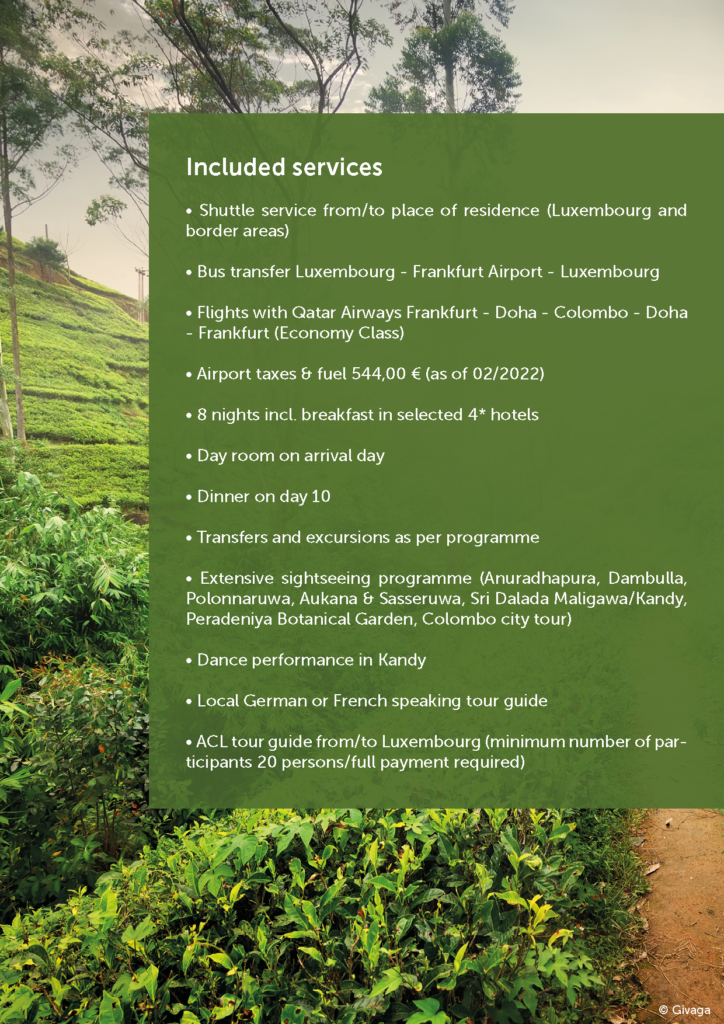 In the morning transfer to Frankfurt Airport, at 15.25 hrs flight with Qatar Airways via Doha (arrival 23.25 hrs) to Sri Lanka.

At 01.30 hrs onward flight (with Qatar Airways) to Colombo. Upon arrival at 08.45 hrs, your tour guide will greet you with the welcome greeting “Ayubowan” (May you live long!). Transfer together to the Goldi Sands Hotel in nearby Negombo. Check-in and time to relax or take a walk on the beach, the hotel is located on the Indian Ocean. In the early afternoon, drive to the “Cultural Triangle” in Anuradhapura. On the way, small villages, dagobas (dagoba = Buddhist building for the worship of Buddha, comparable to a stupa) and rice fields along the roadside set the mood for the coming days. Overnight at Hotel Forest Rock Garden****/Anuradhapura.

The temples of Anuradhapura, dating from different eras, document the importance of Sri Lanka’s first royal city. Marvel at 3000 years of history, imposing temple ruins and dagobas. Your guide will introduce you to Buddhism under the famous Bodhi tree, an offshoot of the tree under which Sidhartha Gautama became enlightened in Bodhgaya, India. Afternoon at leisure. Optionally, you can visit the cradle of Sri Lankan Buddhism at sunset. The ascent to Mihintale leads over more nearly 3000, mostly uneven steps to the top of the mountain of the same name. Once at the top, a magnificent view awaits you. Overnight at Hotel Forest Rock Garden****/Anuradhapura. (F)

Note on the Mihintale: especially the last 300 steps up the Mihintale require not only a good physical condition, no fear of heights and surefootedness, but also athletic agility. On the last few metres, you climb the Maha Seya, the great stupa, by means of an iron ladder over large boulders. The less athletic can climb the level ground at the Ambasthala Vatadage stupa, which is about 2200 steps away.

On the way to Dambulla, two more highlights await you: the monumental Buddha statues of Aukana and Sasseruwa (approx. 300 steps) are masterpieces of Ceylonese stonemasonry. In the afternoon you explore the impressive caves of Dambulla (approx. 400 steps). Five caves adorned with magnificent statues and the finest paintings once served King Vattagamani Abhaya as a hiding place. In gratitude, he endowed the first hermitage, other kings followed suit and these enchanting caves with their very special atmosphere were created. Overnight at Hotel Amaya Lake****/Dambulla. (F)

Polonnaruwa is another must-see place in Sri Lanka. The sprawling ruined site was Ceylon’s second royal city. Abandoned to the jungle for more than 600 years, it was rediscovered by British archaeologists at the end of the 19th century. Among ancient trees stand not only venerable sanctuaries, but also the remains of two palace complexes. Today they are inhabited by countless lively monkeys. In the nearby Minneriya National Park, you go stalking in the afternoon and take a jeep safari. Nowhere else on the island is the elephant density as high as here. An unforgettable experience to get so close to the pachyderms! Overnight at Hotel Amaya Lake****/Dambulla. (F)

For sporty people it is a must: the optional climb up the Sigiriya rock: not only the magnificent view, but also the world-famous “cloud girls” make up for all the effort! The approx. 200m high rock rises spectacularly from the plain, and King Kassapa once built his palace on its summit plateau – with a tropical garden, an infinity swimming pool, airy pavilions and erotic paintings. As sure-footedness, fitness and a head for heights are also a prerequisite for the ascent here, this highlight is only offered as an optional extra. In the early afternoon you leave the cultural triangle and travel on to the highlands to Kandy. Overnight at Hotel Amaya Hills****/Kandy. (F)

Kandy is the last royal city of old Ceylon and still something special. It may be noisy and hectic, but it still lives up to its reputation as a city of traders. Countless shops with everything you need to live, from clothes to spices and souvenirs from incense sticks to Ayurveda products to precious stones, can be found in the small town. And it houses the country’s most important holy relic: the upper left canine tooth of the Buddha is kept in a monstrance-like vessel made of gold and silver. Three times a day it is displayed to the public, then the devout Buddhists flock to the Sri Dalada Maligawa temple and make their offerings, mostly in the form of lotus flowers. In the evening attend a dance show, the famous Kandy dances are an institution. Overnight at Hotel Amaya Hills****/Kandy. (F)

The research station in the Botanical Garden of Peradeniya was established 200 years ago by the British, there they experimented with the first tea bushes. Today the garden is a tropical paradise with an overflowing abundance of plants from orchids to banyan trees. Take a stroll through the lush variety, and perhaps you’ll come across a flying fox – they were around back then too. Then it becomes more British and cooler, already the colonial masters appreciated the pleasant climate in the highlands. On the way to Nuwara Eliya, the former summer resort of the British, you visit a tea plantation. After an interesting guided tour, you will of course enjoy a cup of the famous Ceylon tea. At the latest in Nuwara Eliya you will feel like in England. Overnight at the Hotel Jetwing St. Andrews****/Nuwara Eliya. (F)

Organise the day according to your own taste. We offer you an optional leisurely excursion: in a traditional tuk-tuk (with driver) you explore the surroundings of Nuwara Eliya. You will discover tranquil villages, green tea plantations, spectacular viewpoints and the grandiose mountains of Sri Lanka. During the stops on the way, your guide will tell you stories and anecdotes from the highlands. After lunch at a traditional hotel restaurant, the coach will take you back to the hotel. Overnight at Hotel Jetwing St. Andrews****/Nuwara Eliya. (F)

On the drive back to the west coast, you will experience the change of landscape and flora, slowly becoming tropical again. In the afternoon you get to know the up-and-coming capital Colombo: the city tour shows you the old colonial buildings such as the legendary Hotel Galle Face, the genteel quarter Cinnamon Gardens with its gardens and villas and the lively harbour area. Dinner and room until your overnight airport transfer at the Jetwing Colombo Seven****/Colombo Hotel. (B,A)

After midnight transfer to Colombo airport. At 04.00 flight with Qatar Airways to Doha (arrival at 06.30) and on to Frankfurt (08.15-13.05). Bus transfer to Luxembourg and shuttle service to residence.

Programme and flight times are subject to change.

The prices (per person)

Entry (as of 03/2022): for Luxembourgers/Belgians/French/Germans with passport, which must still be valid for at least six months on entry, valid visa/ETA (Electronic Travel Authorization) and complete Covid-19 vaccination. The valid vaccination certificates must be sent to Bollig Tours in time for both the ETA application and the room reservations. A Health Declaration, which is also obligatory for entry, can either be completed online beforehand (link will be sent with the travel documents) or by hand on the plane/on arrival at Colombo airport. As of 03/2022, the conclusion of a Sri Lankan Covid-19 health insurance is also required (12 USD).  Bollig Tours will send you the visa/ETA form, the information about the insurance (if it is still obligatory at that time) and further explanations about entry at the latest with the travel documents in good time before the start of the tour.

Go to Top
We use cookies on our website to give you the most relevant experience by remembering your preferences and repeat visits. By clicking “Accept”, you consent to the use of ALL the cookies.
Cookie settingsACCEPT
Manage consent

This website uses cookies to improve your experience while you navigate through the website. Out of these, the cookies that are categorized as necessary are stored on your browser as they are essential for the working of basic functionalities of the website. We also use third-party cookies that help us analyze and understand how you use this website. These cookies will be stored in your browser only with your consent. You also have the option to opt-out of these cookies. But opting out of some of these cookies may affect your browsing experience.
Necessary Always Enabled
Necessary cookies are absolutely essential for the website to function properly. This category only includes cookies that ensures basic functionalities and security features of the website. These cookies do not store any personal information.
Non-necessary
Any cookies that may not be particularly necessary for the website to function and is used specifically to collect user personal data via analytics, ads, other embedded contents are termed as non-necessary cookies. It is mandatory to procure user consent prior to running these cookies on your website.
SAVE & ACCEPT